Investigative journalist and UFO researcher Paola Harris shared details about a 1945 UFO crash in San Antonio, New Mexico including microscopic analysis of actual materials taken from the UFO. Also, the now grown children, Jose Padilla and Reme Baca, who witnessed the crash, shared their testimony. Harris described the incident when the boys aged 7 and 9 were out on family property during a major thunderstorm and saw an object crash into the ground, leaving a half-mile trench. The two boys went near the craft and saw a piece had broken off. 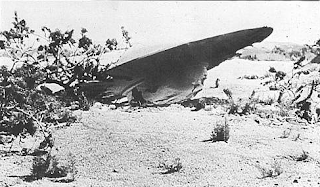 Padilla described the crash as sounding like a sonic boom, and thought it could have been an atomic bomb test. The crashed object, he said, was around 35 ft. in diameter, and 15 ft. high. Baca said they witnessed thin-bodied creatures inside the craft, resembling “praying mantises,” while Padilla characterized them as three little men who were rushing back and forth like they were injured. The boys returned to the crash site two days later with adults, and the creatures were gone, but the craft was still there.
Later, the military arrived and requested to cut a gate on the Padilla’s property in order to remove a “weather balloon.” It was during this time that the boys climbed into the craft and pulled an aluminum bracket off, which many years later they had analyzed by an electron microscope which showed unusual properties– tiny structures that look like fossils (see photos below). For more, read Harris’ interview with Padilla & Baca.
Note: All parts of the radio show are avalible in this player below!
. . . .
Your opinion?