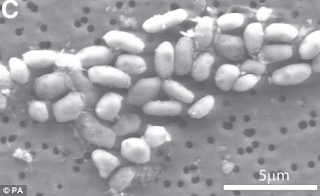 December 3, 2010 – All life on Earth – from microbes to elephants and us – requires the element phosphorus as one of its six components.
But now researchers have discovered a bacterium that appears to have replaced that life-enabling phosphorus with its toxic cousin arsenic, raising new and provocative questions about the origins and nature of life.
News of the discovery caused a scientific commotion this week, including calls to NASA from the White House asking whether a second line of earthly life has been found.
A NASA press conference Thursday and an accompanying article in the journal Science said the answer is no. But the discovery opens the door to that possibility and to the related existence of a theorized “shadow biosphere” on Earth – life evolved from a different common ancestor from all we’ve known so far.
“Our findings are a reminder that life-as-we-know-it could be much more flexible than we generally assume or can imagine,” said Felisa Wolfe-Simon, 33, the biochemist who led the effort.
Prompted by debate about the possible existence of a shadow biosphere, Wolfe-Simon set out specifically to see whether microbes that lived in California’s briny, arsenic-filled Mono Lake naturally used arsenic instead of phosphorus for basic cellular functions, or were able to replace the phosphorus with arsenic.

She took mud from the lake into the lab and began growing bacteria in Petri dishes. She fed them sugars and vitamins but replaced phosphate salt with arsenic until the surviving bacteria could grow without needing the phosphates at all.

Her research found that some of the bacteria had arsenic embedded into their DNA, RNA and other basic underpinnings.
“If something here on Earth can do something so unexpected – that breaks the unity of biochemistry – what else can life do that we haven’t seen yet?” said Wolfe-Simon, a NASA Astrobiology Research Fellow and member of the National Astrobiology Institute team at Arizona State University.
Continue reading: www.washingtonpost.com
NASA- Astrobiology News Highlights – Life Built From Arsenic Dec 2nd
Carbon, hydrogen, nitrogen, oxygen, phosphorus and sulfur are the six basic building blocks of all known forms of life on Earth. Phosphorus is part of the chemical backbone of DNA and RNA, the structures that carry genetic instructions for life, and is considered an essential element for all living cells.

“NASA’s anticipated press conference today did announce the existence of new life. No, it’s not E.T.; but it is a revolutionary finding. Up until now, scientists would say that six elements were absolutely necessary for life to exist: carbon, hydrogen, nitrogen, oxygen, phosphorus and sulfur. Dr. Felisa Wolfe-Simon, a NASA astrobiology fellow at the United States Geological Survey has broadened that list, as evidenced by her research revealed today.
Here’s how… The key element of phosphorus is what links the backbone of DNA together. Arsenic sits just beneath phosphorus on the periodic table of elements, and it is toxic to life.
However, Dr. Wolfe-Simon found an organism that actually learned to cope with arsenic. Taking mud bacteria samples from the bottom of Mono Lake in California, she gradually fed the life form arsenic. To her surprise, the experiment did not kill the organism. Instead, she suggests, it incorporated the element into it’s phosphorus lifestyle. Columbia University Astrobiologist Caleb Scharf compares this adaptation to “”if you or I morphed into fully functioning cyborgs after being thrown into a room of electronic scrap with nothing to eat””.
The findings have a relationship with NASA’s search for life in space because it expands the scope of what possible life conditions to look for in other worlds. “