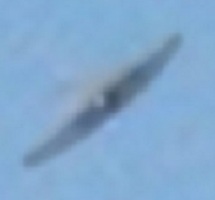 Latest UFO sightings – This daytime UFO was photographed in the sky over Placerville in Idaon on 27th November 2010 around 11:15 am.

Witness report: My son in law and myself were deer hunting near Placerville, Idaho around 11:15am on November 27, 2010. It was a clear day with some cloud cover and about 38 degrees. There was no Deer/Elk to be found or even a chipmonk or squirrel. I thought that was a bit odd since this area is teaming with wildlife. In fact, the whole time we were in that valley it felt as if someone was watching us. Normally that doesn’t bother me due to the fact that this area is overrun with mining claims and people tend to watch their mines closely, but this day was different. After hunting for awhile I was getting bored and decided to snap a few pictures of the beautiful scenery. At the time I hadn’t noticed anything out of the ordinary ( except no wildlife ), however when I got home and downloaded the pictures off my camera, a Canon Powershot A550 7.1, I noticed something that I hadn’t seen with my own eyes on the picture! After zooming in I got a sick feeling when I saw the disk in my picture. Normally a sky watcher, I was startled to see this thing that I could not identify. I am a retired Military man who has worked with aircraft my whole life. In fact while stationed on aircraft carriers, one of my “jobs” was to identify aircraft on approach during launch and recovery cycles. I have never seen anything like what was on this picture that I had taken. I haven’t been back to that area since !
Author (source: mufon)