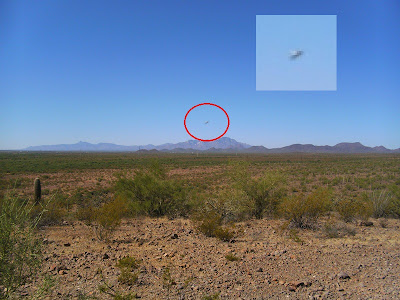 “I live in alter valley and ride a KLR 650 (a street legal dirt bike) so I ride alot on dirt roads and trails. I had been riding around and found a dead cow. I didnt see any obvious trauma or signs of disease. (I grew up on a cattle ranch in Wyoming) After inspecting the carcass and not being able to determine anything I continued on. I rode to the top of a hill ( #1) and took some photos, came back down to continue on. Within 2 minutes my bike died. I tried to start it and couldnt. I got of my bike to take a look and as I removed my helmet a silver glint in the sky caught my eye. I grabbed my camera and was only able to take one photo before it disappeared.It was completely stationary and I observed it for aprox 30 to 60 seconds. If I had to guess at an altitude I would say several thousand feet. It was South West of me and looked to be over Sasabe road south of three points. I heard no noise at all. I stood there for a minute just going over things in my head and then remembered that I was stranded. I tried to start my bike and it fired right up. the hill #1 lat=32.1404840446, lon=-111.290579283 position observed from lat=32.1348177236, lon=-111.2807.”
Author (source: mufon)
Your opinion?