This video was already posted on our site – here -, but now I finally have more informations about this UFO sighting. 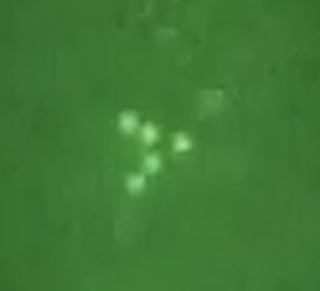 AMAZING footage of a UFO has been taken in Ireland – as The Sun re-launches the nation’s X-Files.
A triangular formation of lights was filmed flying at night at “incredible speed”.
Experts reckon the sighting near the River Liffey in Dublin could be a secret aircraft – or spacecraft.
Nick Pope, who probed mystery sightings for the MoD for three years, said: “The video seems to have been taken through a night scope and presumably shows things not visible to the naked eye.
“It appears to show a structured craft moving at incredible speed. The configuration of the lights is unlike any aircraft I’ve ever seen.
“It’s either some secret prototype aircraft or drone, or something considerably more exotic.”
Any sightings in Britain will NOT be officially recorded because the MoD last month axed the department probing mystery threats. Chiefs branded the Ł50,000-a-year department an “inappropriate use of defence resources”. It came despite the near TRIPLING of alleged UFOs between 2008 and last year’s 643.
The Sun will pick up the baton, and release a rundown of your sightings, like the MoD used to.
Nick said: “The MoD’s decision was bizarre. While I’m sure they’ll investigate sightings from pilots and anything unusual on radar, the public had nowhere to go. There’s massive public interest in this issue. If there’s something unusual in our skies, we need to know or we could be leaving ourselves open to terrorist attack.”
The MoD defended its decision to shut the UFO division.
A spokesman said: “We do not feel there is any military value in reviewing the public’s sightings.”
Source: http://www.thesun.co.uk/sol/homepage/news/2819116/UFO-is-spotted-over-Dublin.html#ixzz0dLY7ESiq

3rd February 2010 – One of our readers has submitted – this youtube – link; “Something fishy is going on here. This exact video was posted on youtube in Dec. 2008. The location was identified as Fremont, Cal. Someone is playing games.”