This pictures were taken in Ittiri – Sardinia, Italy on 15th September 2009. 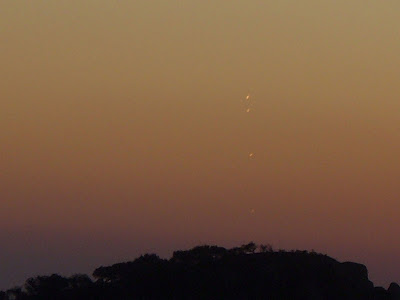 “This is the exact location where the sighting took place. http://is.gd/5Jy9H > google map link)

It was roughly 7:30pm at sunset (sky predominately orange) and I was driving while I saw three very bright objects almost perfectly vertically aligned in the sky. Not high in the sky but just above the horizon. I first noticed the objects because they were very bright, the brightest objects in the sky and the only. It was too early to see any star and I thought it was very strange that three different planes flying at three different altitudes could be so bright and shine for such a long period of time without losing the reflection of the rays of light. It didn’t make sense to me.
I pulled over and parked the car immediately. I started taking pictures of these three objects. They were predominately white in colour but with orange “tails” as if they were “oval missiles” or very small “comets” moving extremely slowly and in one direction. There was three of them in total at the beginning of the sighting. They were vertically aligned and the two objects at the top were closer to each other than the 3rd at the bottom however they moved to the left of my pictures and toward the horizon without losing the vertical alignment. Due to the fact that the 3rd object was distant to the first two it was the first one to go out of sight leaving the two (now less bright) ovals on their own. They kept moving very slowly for the whole sighting. The interesting thing was that while these 3 ovals disappeared at the horizon two more oval came “forward” to me from the horizon and again they were extremely bright, flying not horizontally but they had a 45 degrees inclination. Both of them, and they were almost as “mirrored” meaning that once again they moved without losing the alignment between each other and they came forward and brighter and brighter. Eventually the closest one to me disappeared. it faded away and all I could see after it vanished was a very tiny black dot, almost impossible to keep track of at bare eye but at least I’m sure it was predominately black.
I didn’t stay longer to see what happened to the second bright oval as it was late and it was the only one now left in the sky. Me feeling is that it eventually faded away like the previous one.
I was very excited for the whole sighting and I felt extremely happy and shaken at the same time because I knew that I was witnessing something that can’t be easily explained and that I’ve never seen.
Moreover I wasn’t on my own, my girlfriend was with me and she confirmed that she never saw anything like this either.
I wish I could attach all the pictures I’ve taken but I put the most meaningful ones reminding you that I’ve got more of them where you can literally see the “path” that the objects have taken while I was watching them.
The pictures attached haven’t been modified in any way. They come straight from my camera. No photoshop – nothing.
I hope to have contributed in my little to a much bigger cause.”
Author (source: mufon) 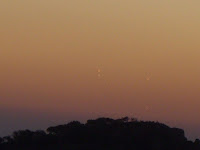 5 objects in the sky over Italy