Video footage of a UFO hovering above the British coastline has been captured by holidaymakers in Somerset – February 11, 2009. 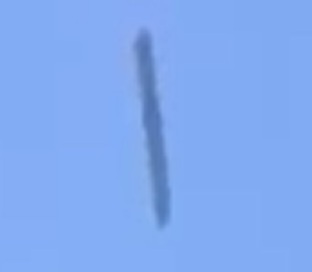 Caravaners were left baffled when the mysterious cylinder hovered over a busy campsite in Brean, Somerset. They claimed the unidentified black metal object stands out clearly against the blue sky, where it can be seen darting up and down for more than 10 minutes.
Local police reported no unusual activity, but witnesses were left convinced they had seen an extra-terrestrial spectacle.
It took place on a sunny afternoon last July when tourists staying at an unidentified holiday park spotted the object. One grabbed his video camera and managed to capture its strange, erratic movements in the sky. The video was shot at the height of the tourist season and stopped hundreds of holidaymakers in their tracks. But it only emerged yesterday after it was sent anonymously to local news website.
UFO expert Malcolm Robinson said the object was “totally consistent” with other sightings. Mr Robinson, who runs UFO group Strange Phenomena Investigations, said: “This video of a UFO is clearly very exciting. “While UFOs are commonly thought to be spherical in shape, we receive dozens of calls from people who have spotted similar cylinder-shaped objects.

“There is, of course, an argument that this could be a weather balloon or some other common object.”
“But my research has shown that it is totally consistent with other UFO sightings, none of which have been hoaxes or naturally-occurring phenomenon.”
The footage has since been uploaded onto video sharing website YouTube, where it has sparked fierce debate. One user claims it was a “high altitude observation balloon payload”, while another argues it looks “like a metallic shape, higher than a plane, making it pretty big”. It is not the first time a mystery object has been spotted in the skies over Brean.
Last June, local Coastguards were called out to search Somerset’s coastline after sightings of a mystery parachute and canister, which were never found.
source: http://www.telegraph.co.uk/news/newstopics/howaboutthat/4591148/UFO-filmed-above-Somerset-coastline-by-holidaymakers.html