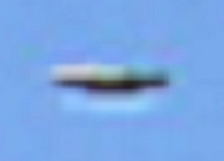 March 26, 2010 – THE chances of anything coming from Mars really are a million to one, says astronomer Chris Arkless.
While Mr Arkless believes the universe is home to other life forms, he said human understanding of travel meant there was nowhere nearby for visitors to Earth to come from.
“It would be a bold and foolish person who claimed there has never been or is not still life on Mars but we are talking bacterial forms of life, not little green men,” Mr Arkless said.
“It is impossible to travel faster than the speed of light, under our current understanding. Alpha Centuri, the closest star is 4.3 light years away so there is nowhere for aliens to come from to hover over Earth.
“That does not mean there is not life elsewhere but just that that life could not visit here.”
Mr Arkless said a photograph received by News Limited of a UFO in the sky on the Lyell Highway between Queenstown and Hobart was a hoax which had been created through computer technology.

* Is it a hoax? what do you think?
The photograph was allegedly taken on Janaury 3 near the Franklin and Alma Rivers.
“It does not look like an aircraft and if you zoom in you can see the pixels are different around the supposed UFO,” he said.
Mr Arkless said reported UFO sightings came in waves and none reported in Tasmania have been verified as alien craft.
In December last year unusual lights in the sky over Hobart sparked a wave of concern that a plane was about to crash but a Tasmanian UFO hunter said it was probably a meteor or space junk.
The source of the mystery lights remains unknown and Tasmania Police took dozens of calls from people around the state who saw the lights heading south.
Ten months earlier, there were reports of strange lights over Launceston
The TasUFO Centre, which has investigated hundreds of sightings since it was established in 1965, interviewed people who saw the lights but did not comet to any solid conclusion.
‘I am a child of the space age myself and when I was a little kid I joined a local UFO spotting group,” Mr Arkless said.
“The sightings usually ended up being Venus.
“Obviously there are going to be unidentified flying objects in the sky such as unidentified aircraft, but it is highly unlikely any are from outer space.”