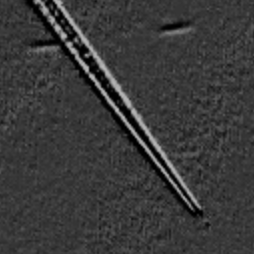 One year old daytime UFO footage recorded in Cardiff, UK on 29th May 2010.

On the 29th May 2009 in Cardiff, South Wales in the UK – I had just recenty purchase my Sony Camcorded and decided to test it out. During the daytime as you can see from the footage it was mainly testing the zoom and focused on a jet hight above. Nothing became apparent at that time. I decided to look back at some of my early videos becouse one of my first posts which was taken with my camcorded was the very same night of a silent low craft which we saw come over our house and looked very much like a triangular shaped UFO. As this was very low and silent we filmed it but the footage is shaky from the excitment of seeing and filming our firs UFO in Wales.
Author (ruderob11 @ youtube)