Article from www.cropcircleconnector.com:
Ladies and Gentleman – This Must be the best example in Barley EVER !! 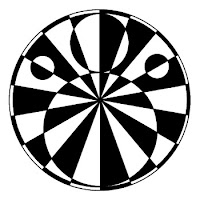 If I sound excited, then you would be right to think it so. This second formation in barley is probably the best I have seen in this type of plant. The first initial and visual surprise is the way the barley has been gently bent and almost all heads of the plant have what could be described as a droop or heads bowed there was no visible flattening at all this technique I have not see in barley formations before. In comparison to Silbury Hill where the plant seemed to be forced more to the ground here the at Liddington Castle there was no visual resemblance to the Silbury Hill formation at all almost as if a gentler force was applied, also if you applied gentle pressure on the bent barley by pushing it down, the plant bounced back to its original bent position. Lines and elements within were absolutely geometrically pristine, as if a master carver had spent weeks in perfecting this exquisite design. Standing inside the formation you could see the half circles and triangular elements but it was hard to distinguish what the formation may have been at ground level.- seeing the formation from above it was easy to say OMG !. Also another brilliant effect is the way the shading is created; it gives you that extra wow factor when viewed from above.
Without a doubt in my mind, that the makers have stepped up a notch with an intent to impress and prove that this is physically not possible for man to create.
On the way into the formation the screen on my mobile phone started flashing and then simply died, its not until I exited the formation and returned to our vehicle the screen faded back in again. 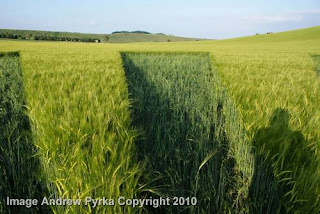 We also used a Electromagnetic Magnetic Field Radiation Tester the readings were nothing to shout about but a most extraordinary thing happened which we I cannot explain. Igor Byttebier and Antoinette Dyson were present and conducted the test for me. This meter also measures air temperature in Fahrenheit and Celsius Antoinette walked round the formation with hope for the meter alarm to go of, but nothing, as soon as she stood in the centre of the formation the temperature reading shot up to 46 degrees Celsius !!! then few minutes later rapidly dropped to minus 24 degrees Celsius. Few minutes later the battery in the meter started to fade so I went to get a replacement but also found that this battery was completely discharged. The evening was warm and sunny so we have no explanation to what might have occurred. Approximately half an hour later I returned to my kit bag and started to pack away my camera and to my surprise I could see my breath as one can on a cold winters day !!. Also moisture droplets were becoming visible on plant stems within the formation when we first entered this formation our shoes were perfectly dry but on exit my shoes and bottom of my trousers were wet. Normal temperature at the time was approx 20 degrees Celsius so some kind of fast temperature changes occurred within this formation. ???!!!

The formation measured 225 feet in circumference as I was the only one left in the formation other measurements were not made as they would simply be not correct. A formation of this size would require at least two people to conduct such an exercise. 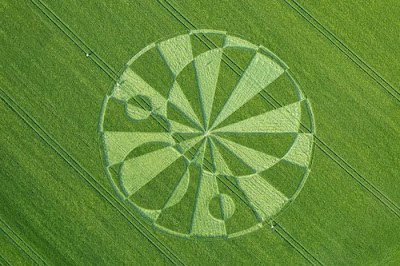 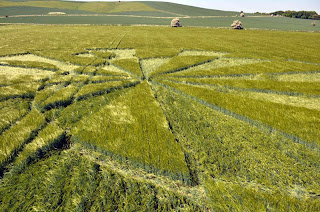 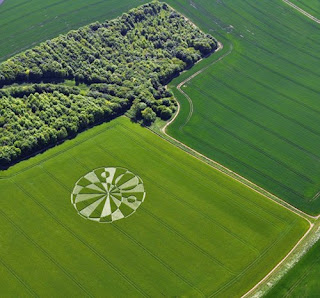 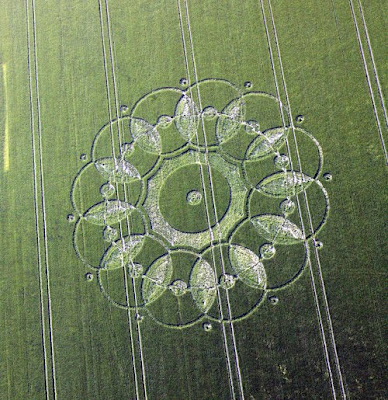