This UFO was witnessed and photographed by John Powell while he was watching a fly over of a RAF Hercules plane on 22nd July 2009. The British MoD refused to investigate, stating that its of “no defence significance” and “it poses no threat”. The MoD’s reasoning for not investigating the incident was basically that “there is no evidence that there is a credible threat”.
Which I take as meaning basically “We know what it is and don’t worry it won’t kill us.”
This has been their justification for refusing to investigate UFO cases (at least publicly) for quite some time now
I am reminded of the former Admiral of the Fleet Lord Hill-Norton who had the courage to ask questions about UFOs in the Houses of Parliment, upon being told that the Rendlesham Forest case was of “No defence significance” he replied:
“Either, large numbers of men and the Commanding General of a base equipped to carry a nuclear arsenal were hallucinating, or, what they say happened did happen, and in either case it is of EXTREME defence significance to the UK, and I’ve never had a satisfactory rebuttal of that statement”
Photographer John Powell is not hiding or anonymous he is willing to face the light of day and answer questions and he has stated he is no UFO enthusiast or believer but he remains adamant he caught something he thought was a high level of strangeness. 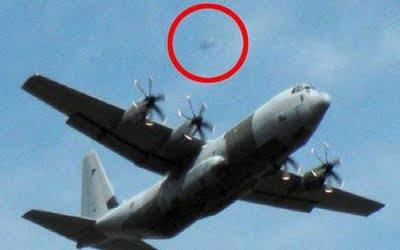 An amateur photographer believes he captured a UFO tracking an RAF Hercules as it approached RAF Lyneham in Wiltshire.
John Powell, 56, claims an unusual silver orb was following the military craft as it came in to land at the base.
The retired school teacher was gardening at his home in nearby Westbury when he noticed the sun glinting off the circular surface.
“I don’t believe in things from outer space but that thing was definitely tracking the plane,” he said.
“My neighbour was in the garden at the time and I wanted to shout to them, but I didn’t want to say ‘there’s a flying saucer in the sky’ so I didn’t say anything in the end.”
Mr Powell, who taught computer sciences in Belfast for 30 years, added: “I thought at the time this is too good to miss but I didn’t think the picture would come out as good as this.
“If I were to say it was a shot in a million I don’t think I’d be exaggerating. I’m desperately curious to find out what it is.
“Since I’ve taken the photo I’ve been on some UFO websites and there’s nothing remotely like this with an RAF plane being tracked.”
The incident happened as John was gardening at 3.45pm on July 22.
RAF Lyneham is the military base where the bodies of fallen British soldiers are flown back into the UK on Hercules planes but there were no repatriations that day.
Ministry of Defence bosses said they would not be investigating because they so not consider it a “potential threat”.
A spokesman said: “The MoD examines reports solely to establish whether UK airspace may have been compromised by hostile or unauthorised military activity.
“Unless there is evidence of a potential threat, there is no attempt to identify the nature of each sighting reported.”
Continue reading at www.telegraph.co.uk
Your opinion?