July 19, 2010 – Last week a Chinese airport was temporarily closed, and flights suspended and diverted, because of a UFO. A number of people had apparently seen a white glowing object proceeding rapidly across the evening skies over Xiaoshan, near Hangzhou in Eastern China. Panic broke out – and the authorities decided to close the airport just in case.
I’m not sure that’s ever happened before, and – if not – it’s interesting that China should be the first country to experience it. This is the culmination of a fast-growing accretion of UFO stories in the People’s Republic, with four reported sightings in the last month (funny how the flag-wavers of scientific materialism often find they’re not so confident when push comes to shove).
In fact this trend has already found its literary depiction. Last year the (rather good) expatriate Chinese writer Xiaolu Guo published a novel called UFOs In Her Eyes, relating how the sighting of a flying saucer in a Chinese village leads to great publicity, large new developments and the ultimate destruction of the village and the lives of its poor inhabitants. All too plausible, one fears. But what is it that these people are seeing, if indeed the sightings are not just a reification of the wish for a different reality to the grotty one they’ve got?
Of course, the prosaic view is that it’s probably the People’s Liberation Army up to something we’re not supposed to know about. The Chinese system is noted for not letting the left hand know what the right hand is doing, which is probably why the civil authorities were initially in the dark. Indeed, the word is that the government now knows perfectly well what it was soaring over Xiaoshan last week, but there’s a military angle to it so it’s keeping quiet. However, with the airport closure, they’ll probably have to fudge up some kind of explanation before long.
But isn’t the idea of extraterrestrials landing in China rather an attractive one? After all, once they’ve worked out the Chinese for “take me to your leader” it’ll be an easy instruction to follow. And I’m sure the mummified corpse of the Great Helmsman in the Tiananmen Square mausoleum and the green eight-armed Klugg of the Mysterons will get on like a house on fire.
Author: Tim Collard
Tim Collard is a retired British diplomat who spent most of his career in China and Germany. He is an active member of the Labour Party.
source: blogs.telegraph.co.uk
New photos:
New photos of UFO over China on 7th July 2010. 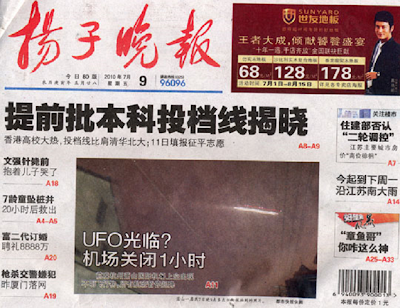 Image submitted to Earthfiles.com from an American-Chinese businessman with contacts in Hangzhou, China, who has asked to remain anonymous. “The photo is real per my trusted employee. Taken between 8 PM and 9:30 PM on July 7, 2010, within 25 kilometers of Xiaoshan Airport in Hangzhou. The buildings match the area. The lights out so early in evening is very common as power costs more in China than USA.

Experts join in on the investigation of the UFO in China