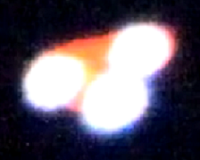 Dimensional Entities entered the south western sky around Scorpio’s tail and came closer to display for me as seen in these clips, a few stills were taken as higher definition to present them for you. The early HD stills are from a previous session with the Canon 5D Mk II taken 29th June evening session as examples as all my sessions are not able to be published, only a small sample of what I record is seen by anyone.
Why? …… because the media, academia and your politicians suppress any such evidence so you stay dumb and controlled by them for self serving reasons. Even our supposed scientists think or at say they are just “swamp gas” maybe they have very short necks or long noses…..
Author (orgasmictomato @ youtube)
Your opinion?

Australia UFO: What the heck was it?