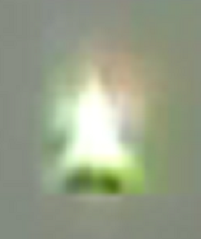 Latest UFO sightings – Strange bright object was filmed hovering in the sky over Montana in USA on 27th July 2010.
Witness report: UFO Sighting in Montana of Glowing Orb on 7-27-2010, During Day
I have lost count how many day times sightings ive had since they started back in 2009. Im very happy to have been able to film this one to show others the kind of things im seeing. What i saw was a white sphere make 3 white puffs and then fly thru each one, after the third puff it started to glow silver and seemed to change. The 3 white puffs can be seen in beginning of footage as well as a picture i added. Note the line thru the center of each puff.This is where the white sphere had flown thru.There were 2 of these lights up in the sky, i only filmed the one that made the white puffs. No fear …………….. Update: Youtube has offered me” revenue sharing” for this video and i will not be accepting it . Ive posted just to show you guys whats going on around the world.
Author (TaiwanSCW @ youtube)
Your opinion?

UFO filmed in a storm in Absecon, New Jersey Jul-2010