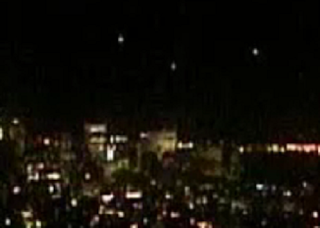 Latest UFO sightings – This video of some sort of triangle formation was recorded via webcam in New York City between 9 pm and 11:30 pm on Wednesday, 13th October 2010.
Author’s report: The screenshots are in chronological order, taken periodically between 9 PM and 11:30 PM est. The ones in the video were taken during the height of the activity. Clearly not balloons (as people have claimed during the day light sightings) or conventional aircraft as it’s naturally a no-fly zone.
What makes this so significant is that an ex NORAD officer predicted this would happen (link).
Author (TheOldTotesMcgotes @ youtube)
UFO Sightings over Manhattan local MSM coverage October 13th 2010
The NYPD and the FAA fielded numerous phone calls Wednesday afternoon from freaked out New Yorkers who say they saw UFOs hovering over Manhattan, the New York Post reported.
Your opinion?