A new sci-fi film about Nazis has reignited a debate in Germany about Hitler’s development of UFOs.
November 17, 2010 – The Finnish sci-fi comedy ‘Iron Sky’ centres on real-life SS officer Hans Kammler who was said to have made a significant breakthrough in antigravity experiments towards the end of WW2.
The film relates how, from a secret base built in the Antarctic, the first Nazi spaceships were launched in late 1945 to found the military base Schwarze Sonne – Black Sun – on the dark side of the Moon.
This base was to to be used to build a powerful invasion fleet and return to take over the Earth once the time was right, in this case 2018. 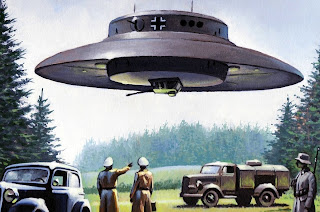 But a new report out this week in Germany in the magazine PM purports that there is “strong evidence” that a Nazi UFO programme was well advanced.
Hitler ordered Luftwaffe chief Hermann Goering to develop the super weapon that would change the war.
The PM report quotes eyewitnesses who believe they saw a flying saucer marked with the Iron Cross of the German military flying low over the Thames in 1944.
At the time the New York Times wrote about a “mysterious flying disc” with photos of the device seen travelling at extremely high speeds over the high-rise buildings.
The best known of the Nazi UFO projects was the Schriever-Habermohl scheme, named for Rudolf Schriever and Otto Habermohl.
Continue reading: www.telegraph.co.uk