Latest UFO sightings – This two daytime objects were photographed flying over Arizona-California desert on 29th September 2010 at 1:36 pm.
Witness report: Two Disc-shaped Objects Over Arizona-California Desert
My husband and I were moving from Alabama to California, and we spent the night of September 29 in Kingman Arizona. We left around 11am local time, and the time-stamp on the photographs says 1:36pm and was set to Central time. While he was driving the car down I40-West, I was taking photographs of the surrounding desert. I’m not exactly sure if we were in Arizona or California when I took those pictures, and I did not see anything myself when I was taking them. When we were going over the photos of the trip on the computer later, I noticed that there was something unusual in them, and my husband suggested that I send the photos in here.
Author (source: mufon) 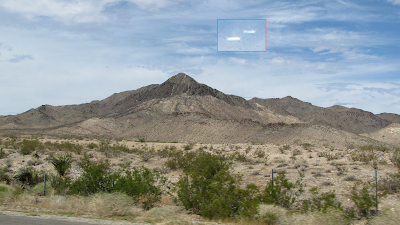 Disc-shaped UFO was seen and photographed over Lexington, Kentucky 13-Apr-2011