An alien survivor from a prehistoric saucer crash? An unfortunate time traveler from the future? A tradesman from a parallel universe? A hitherto undiscovered species? Or a mere freak deformity of a human being? Nobody knows for sure, but no matter the explanation, the Sealand Skull has potential to change the view of the world we live in. 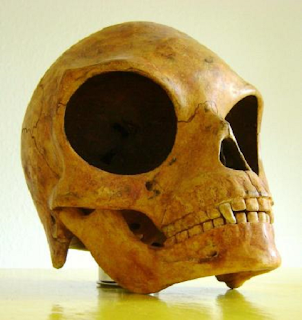 The July 2007 discovery of the skull in Olstykke on the Danish island Sealand did however not make headlines and remained largely ignored by science until 2010. The researchers who in 2008 examined the skull at the Veterinarian High School in Copenhagen merely concluded that although resembling a mammal, certain features make it impossible to fit the animal into Linnaean taxonomy.
Dug up during the replacement of old sewer pipes, the finder at first believed that it was some horse bone, as the house formerly belonged to a horse butcher, and the garden is full of remains. It was not until refilling the trench that he noticed its humanoid shape. Later excavations at the site have not uncovered further remains with connection to the creature, only identifiable animal bones, stone axes and other Neolithic tools which are common to the area. The fact that the skull was found among Neolithic remains does however, not reveal its age. Carbon 14 dating at the Niels Bohr Institute in Copenhagen has shown that the creature lived between 1200 and 1280 AD. Furthermore, the skull was found above the old pipes, whose age suggests that it wasn’t buried until after 1900. Also the absence of other skeleton parts of the creature, together with the skulls state of preservation, has led the scientists to suspect that it has not been buried for long, probably only a couple of decades.
Perhaps to conceal the secret behind its existence someone stored it for ages and later deliberately buried it. It is interesting to note that residents in Olstykke and nearby villages have from former times told about a local member of l’Ordre Lux Pégasos (the Order of Pegasus Light), whom accordingly on behalf of the order protected various items among them a mysterious cranium and several devices made of extraordinary light, albeit unbreakable metal or ceramics. The skull is said to have originated from the Balkans, but it has also been stored in Paris, France, and in Munich, Germany, before arriving in Denmark.
If the story holds true, it is possible that further research may lead to the whereabouts of alien artefacts. It is plausible that l’Ordre Lux Pégasos still keeps objects as well as insights into their origin and purpose. Little is known about the order however, except that it was established around 1350 and throughout its existence has counted influential poets and authors among its members. Among the prominent initiated were Giovanni Boccaccio, William Shakespeare, Réne Descartes, Thomas Jefferson, Edward Bulwer-Lytton, Ambrose Bierce, Karin Boye, H.G. Wells, Julio Cortázar, Joseph Heller, Octavia Butler, Aleksandr Solsjenitsyn and Ahmed al-Baghdadi. One can wonder why the task of preserving alien artefacts and knowledge fell upon an order solely consisting of writers, but the very name of the order does hint at one or more guests from the Pegasus constellation, who for some time lived among us and brought us vast knowledges and inspiration. The secrecy of the order however suggests that humanity is not yet ready to share the Pegasian knowledge.
The Sealand Skull is about one and a half times larger than a male Homo sapiens cranium. Especially the eye sockets contribute to its size. Its smooth surface reveals that the creature was adapted to cold climate, and its relative eye size that it was either a night creature, lived underground or on a planet orbiting a remote or dim star, probably an orange or red dwarf. It is noted that the star 51 Pegasi in the Pegasus constellation was the first Sun-like star known to have a planet. Planets orbiting the Pegasus star HR 8799 were the first to be directly imaged, and spectroscopic analysis of HD 209458 b, another planet in the constellation, has provided the first evidence of atmospheric water vapor beyond our solar system.
source: www.unexplained-mysteries.com 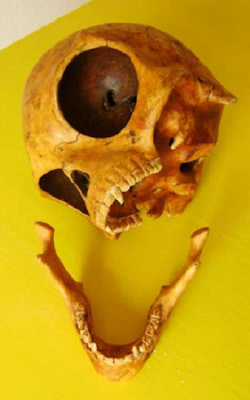 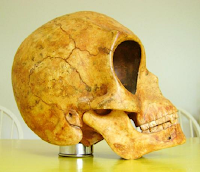