“This particular interview and subject of ECETI RANCH is very important to me, (vangelis721). Mt Adams and many of the Volcano Mountains in the northern Oregon and Washington Cascade Basin hold a very special meaning to the UFO/Inner Earth connection. Having been to ECETI on several occasions via employment and for pleasure, I personally know of the power and the Light Beings/UFOs present. And I also know of the malevolent and neferious acts of the Greys and Dracos (reptiloids) which is the other side of the coin.”
“Over the years there has been division in the UFO Community between the “Light Seekers” and the “Fear Mongers” and rightfully so. With the amount of emphasis portrayed on the negative experiences with abductions versus the mythical contactees one who is the lay person has quite a bit of information to disseminate. I have found both parties to be at fault to a degree. The information is out there to find out for yourself.” vangelis721
James Gilliand: 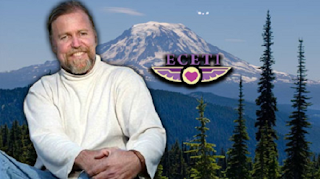 Reunion with Source and Becoming Gods 2 (as illustrated above). He is the director of the Self Mastery Earth Institute and ECETI, Enlightened Contact with Extraterrestrial Intelligence. After a Near Death Experience James returned with what he refers to as Interdimensional Mind; the ability to move beyond the body and the personality into other planes and dimensions throughout the multiverse. This includes the ability to experience different time lines and future probabilities. He is dedicated to the awakening and healing of humanity and the Earth as well as researching and ushering in new healing and Earth friendly energy technologies. James has a timely message, and now is the time for this message.
James Gilliland was raised in a small desert town spending most of his time in nature. He studied biology, chemistry, physics, psychology, pre-law and pre-dental, yet did not acquire a degree or practice professionally. James has in depth experience and knowledge in construction industry, grocery industry, real estate industry and owned his own commercial real estate company which developed and managed shopping centers and other large multi-million dollar projects. He was also on the board of directors for the chamber of commerce.
This began a spiritual journey and 20 year quest which included 6 years of Yoga, The Inner Christ Ministry, and the Tibetan foundation were he was certified as being an intuitive visionary of the highest consciousness and energy. He has studied with other yogis, lamas, master teachers and continuously has been taught from within through his extensive practicing of meditation. He is a teacher, spiritual counselor, energetic healer, and published author, “Becoming Gods 1 & 2”, which can be sent upon request. He was recently honored by a venerated teacher in the Lama traditions as “Rigdzin Norbu” which translated means “Jewel of Pure Awareness”.

Note: All parts of the radio show are avaliable in this player below!