March 24, 2010 – IT EMERGED from a blazing light in the clouds, descending on a busy street before zipping off silently into the sunset.
Just what – or who – propelled the strange flying disc across Sydney’s skyline may never be known.
But while the close encounter was over in seconds, it was enough to convince mother-of-two Fiona Hartigan that she’d just seen a UFO.
And she has the photos to prove it.
Ms Hartigan yesterday said she had just got out of her car on Sunday evening to snap a few sunset photos when the amazing events began.
“As I was about to take the picture this black object appeared and then it started to move,” she said.
“It started off about 800m away but it came closer – to about 400m – and then two other little round things appeared from this bright orange light above.
“There was no noise. It was calm and peaceful but it was very weird.”
Ms Hartigan said the main UFO then shot off above Governor Macquarie Drive at Chipping Norton, with the smaller UFOs zipping away in the opposite direction. 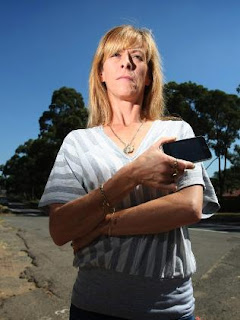 “I don’t know how to explain it – I’m still totally bewildered,” she said.
Right photo: Ms Hartigan at the spot where she snapped the mystery object.
To the sceptic, Ms Hartigan’s photo might show a speck of dust on the lens or something small floating in the air close to the camera.
But close encounters like Ms Hartigan’s came as no surprise to UFO Research NSW spokesman Doug Moffett: “It could be some electrical anomaly that no one has ever seen, it could be an extra-terrestrial craft, it could be something else.
“There does appear to be a blur around the image, which could just be the way it’s shaped, or – and this is pure speculation – it could be due to its propulsion system.
“Whatever the case, it’s an opportunity to learn something new.”
Mr Moffett said there were between 1000 and 1500 UFO sightings in Australia every year, “but that is just the tip of the iceberg”.
“Why would anyone make these stories up? They are setting themselves up for ridicule,” he said.
source: www.news.com.au 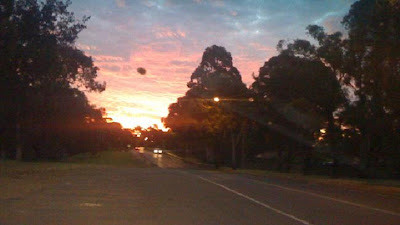 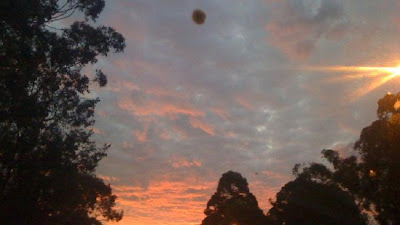 Close encounter: Fiona Hartigan’s pictures of what she believes was a UFO. She says the object made no sound. Click on the photos to enlarge.

UFO sighting reports over Sydney, Australia in the morning today channel 9 news program
24th March 2010: 3AW radio interview with Fiona Hartigan – who is certain she took photographs of UFOs – speaks to Neil Mitchell about her close encounter of the blurred kind.
Your opinion?