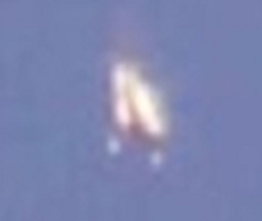 I was on my way to Cabolture Queensland Australia in my car when I saw this thing up ahead I immediatly recognised it as something usual.
This was taken on the Dagular Hwy between Woodford and closer to Wamuran on 16 June 2009 aprox 3:24pm could not switch off auto focus painfull, appeard to B around 1500 feet up moving like a survey helicopter, but as you can see No tail no rotating blades and it had no sound, looked like a cockpit with nothing else I also got a lot of still photo’s off the Video, they are in my photo section check em out for a better look at it
It was moving at the speed of a survey helicopter straight towards Brisbane non stop in North to south direction I recorded it on the D’Agular Hwy between Wamuran and Woodford, I thought surley thousands of people would have seen it the Video has been presented to the Brisbane UFO Society they have been around since the 1950’s everybody clapped,I have as yet to present the photo’s to them, Im amazed that they didn’t ask for a copy to analyse may be they don’t do that?
This is the raw unedited version Has anyone seen this type of UFO before?
You can get a better view of this thing by going through the video frame by frame or just slow it down, it looks like 3 cylinders pointing upward a bit space shuttle’ey with the central cylinder curved at the bottom like a grasshopper with it’s end curved and either it’s landing gear (sort of triangles) on the other two cylinders or they are jets coming out of it still no noise tho would love a spectrum analysis to see if that bit could be explained (Jets or just part of it) may be landing gear?
Author (source: mufon)
LUS 2010 youtube daily motion video production. Most recent Latest UFO sightings reports and evidences, real ufos on net. Oceania UFO examiner, day light triangle.
Your opinion?