by Clark C. McClelland, former ScO, U.S. Space Shuttle Fleet, KSC, Florida 1958 to 1992
October 28, 2010 – Space Shuttle Columbia during STS-80 took a crew of five astronauts into a 17 day, 15 hour and 54 minute mission around the earth, the longest flight in the history of this vehicle. During this lengthy flight a very strange event occurred that even had crewman Dr. Story Musgrave unable to explain what he observed from the shuttle windows. 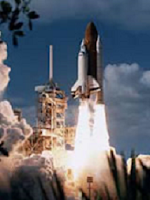 A large disc shaped object appeared below the Columbia. The shuttle was approximately, 190 Nautical miles high.
The disc was first observed to miraculously appear from out of nowhere, flying through the clouds below and progressing from right to left as the astronauts stared in utter amazement. The outer rim of the craft appeared to be rotating counter-clockwise. It was very large (compared to common space junk and breakaway ice), approximately 50 to 150 feet in diameter.
Astronaut Dr. Story Musgrave, a Payload Specialist on the STS-80 Mission, was interviewed following the flight. As he viewed a videotape of the incident which showed lightning flashes in the atmosphere, the city lights of Denver, Colorado and other earthbound sights, he stated: “I don’t know what it is. Whether it’s a washer, debris, ice particles, I don’t know. But it’s characteristic of the thousands of things which I’ve seen. What is not so characteristic is it appears to come from no where. You would think that if it’s facing the dark side or facing a side towards you which is not reflecting the sun, you would think that you would see something there. It’s really impressive.”

During an earlier interview, Dr. Musgrave stated he attempted to communicate with ET life forms during each of his six missions. He actually asked them to take him with them. Now that’s an astronaut with a lot of courage. Dr. Musgrave retired after this flight from NASA. Since then he’s been spreading his considered opinion that alien life exists. When Musgrave speaks of this, it’s no great leap for one to assume he’s admitting knowledge of alien life. As the final slide of a “Grey” ET was shown during a recent astronomy presentation by Dr. Musgrave, he made this surprising comment: “These guys are real… I guarantee it!” Dr. Musgrave does know the truth. This author guarantees it!
Consider that carefully. These are world renown scientists making statements almost beyond belief. Dr. von Braun and others of his stature have the courage to disclose “sensitive” information, but obviously the leaders of the USA and the world do not. If billions could find a way of coping with the overwhelming threat of atomic annihilation for half a century, it is reasonable to assume we can cope with the knowledge of these “Other Intelligence’s” from the stars. We can cope with the fact they are visiting earth, and have been since the beginning of history. We must. Those still asleep must open their eyes. We Are Not Alone.
Read more: thetruthbehindthescenes.wordpress.com
Your opinion?