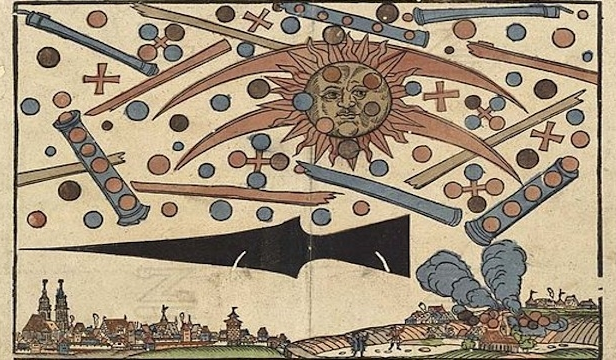 There was a widespread panic reported on April 14, 1561 because of what was described as an aerial battle among hundreds of bright lights flying in the sky from horizon to horizon above Bavarian town of Nuremberg. This event is popularly known today as “The Mass Panic in Renaissance Bavaria.” There are many explanations for the lights’ appearance ranging from UFOs to light refraction. The only account of the event can be read at centuries old broadsheet report.

The tale of the supposed terror and bewilderment was only reported by Hans Glaser’s broadsheet. According to the report, a dreadful apparition took place on the sun on April 14, 1561 and it was witnessed by many people in Nuremberg. The event started with the appearance of two blood-red semicircular arcs in the middle of the sun. The above, below and both sides of the sun became color blood with a partly dull round ball that was partly black ferrous color. All of the sudden other balls came in large numbers forming in set, around three in line, about four in a square and some alone.

This big strange event happened during renaissance Europe where colorful language was part of the life back then. However, this was also the time when people only just started to once again pay attention to the stars and any strange happening in there could give much concern to the society. While this was a god-fearing age wherein accounts usually involved emotive language, the way broadsheet described the event as a “very active set of aerial phenomena” was something not in the account of religious history.

According to the broadsheet account, there were visible bloods all over the skies and the group in the sun went over to the group on both sides and the group standing outside the sun flew into the sun. After over an hour of fighting, they became exhausted to such extent they all fell from the sun down into earth as if they were all burned and created immense smoke on Earth.

For the reason that the broadsheet was written during god-fearing times, it is also believed that this was part of a religious propaganda. Furthermore, it was in this time when religious diversification broadsheets were commonly used for spreading ideological theories. In a closing statement of Glaser’s account, it said that God may have sent mankind a frightening punishment for being ungrateful of high signs and God’s miracle.