Belgian UFO wave
The Belgian UFO wave refers to a series of sightings of triangular UFOs in Belgium, which lasted from November 29, 1989 to April 1990. 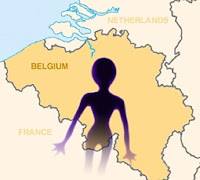 The Belgian UFO wave peaked with the events of the night of 30/31 March 1990. On that night unknown objects were tracked on radar, photographed, and were sighted by an estimated 13,500 people on the ground – 2,600 of whom filed written statements describing in detail what they had seen. Following the incident the Belgian air force released a report detailing the events of that night.
At around 23:00 on 30 March the supervisor for the Control Reporting Center (CRC) at Glons received reports that three unusual lights were seen moving towards Thorembais-Gembloux which lies to the South-East of Brussels. The lights were reported to be brighter than stars, changing color between red, green and yellow, and appeared to be fixed at the vertices of an equilateral triangle. At this point Glons CRC requested the Wavre gendarmerie send a patrol to confirm the sighting.
Approximately 10 minutes later a second set of lights was sighted moving towards the first triangle. By around 23:30 the Wavre gendarmerie had confirmed the initial sightings and Glons CRC had been able to observe the phenomenon on radar. During this time the second set of lights, after some erratic manoeuvres, had also formed themselves into a smaller triangle. After tracking the targets and after receiving a second radar confirmation from the Traffic Center Control at Semmerzake, Glons CRC gave the order to scramble two F-16 fighters from Beauvechain Air Base shortly before midnight. Throughout this time the phenomenon was still clearly visible from the ground, with witnesses describing the whole formation as maintaining their relative positions while moving slowly across the sky. Witnesses also reported two dimmer lights towards the municipality of Eghezee displaying similar erratic movements to the second set of lights.
Over the next hour the two scrambled F-16s attempted nine separate interceptions of the targets. On three occasions they managed to obtain a radar lock for a few seconds but each time the targets changed position and speed so rapidly that the lock was broken. During the first radar lock, the target accelerated from 240 km/h to over 1,770 km/h while changing altitude from 2,700 m to 1,500 m, then up to 3,350 m before descending to almost ground level – the first descent of more than 900 m taking less than two seconds. Similar manoeuvres were observed during both subsequent radar locks. On no occasion were the F-16 pilots able to make visual contact with the targets and at no point, despite the speeds involved, was there any indication of a sonic boom. Moreover, narrator Robert Stack added in an episode of Unsolved Mysteries, the sudden changes in acceleration and deceleration would have been fatal to one or more human pilots.
During this time, ground witnesses broadly corroborate the information obtained by radar. They described seeing the smaller triangle completely disappear from sight at one point, while the larger triangle moved upwards very rapidly as the F-16s flew past. After 00:30 radar contact became much more sporadic and the final confirmed lock took place at 00:40. This final lock was once again broken by an acceleration from around 160 km/h to 1,120 km/h after which the radar of the F-16s and those at Glons and Semmerzake all lost contact. Following several further unconfirmed contacts the F-16s eventually returned to base shortly after 01:00.
The final details of the sighting were provided by the members of the Wavre gendarmerie who had been sent to confirm the original report. They describe four lights now being arranged in a square formation, all making short jerky movements, before gradually losing their luminosity and disappearing in four separate directions at around 01:30. 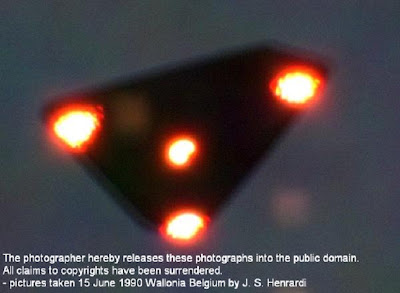 A supposed black triangle, 15 June 1990, Wallonia, Belgium. Claimed to have been taken during the UFO wave, though released thirteen years later.

On April 1990, a photo was taken of the aircraft, and it remains as one of the most famous UFO pictures to date.
After appraising the evidence, the Belgian Air Force found it could offer no explanation for the sighting, but did reject the following possibilities:

In The Belgian UFO Wave of 1989-1992 – A Neglected Hypothesis, Renaud Leclet & co. discuss the fact that some sightings can be explained by helicopters. Most witnesses reported that the objects were silent. This report argues that the lack of noise could be due to the engine noise in the witnesses’ automobiles, or strong natural wind blowing in the direction of a witness, combined with the wind due to driving a vehicle. 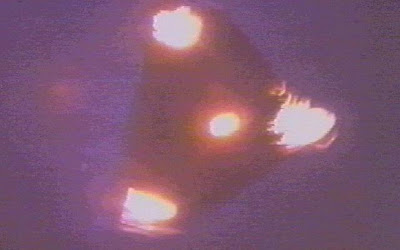 Petit Rechain, Belgium, 1990. One of the most famous UFO pictures ever taken. The photographer, to my knowledge, still remains unnamed. Taken on an April night during a well known “wave,” the photo very clearly shows a triangle-shaped object with lights. One of the best proofs of UFOs we have, especially of a triangle. Original photo was too dark to show object outline, and had to be lightened. Occurred during the wave beginning in 1989.

Summary: Summary of the offical report by the Belgian Air Force regarding the UFO events of March, 1990.

Background:
1. Starting early Dec 89 the BAF has been contacted on several occasions by eyewitnesses who observed strange phenomena in the Belgian airspace. On some occasions they described the phenomena as a triangle-shaped platform up to 200 feet wide with 3 downward beaming projectors, hovering at +- 100 m above the ground and making only a very light humming noise. Some witnesses saw the object departing at very high speed after a very fast acceleration. All observations were made in the evening or during the night.
2. The radar stations which had been alerted by eyewitnesses could not definitely determine a correlation between the visual observations and their detection on radar. On two occasions the BAF scrambled 2 F16 during the evening hours.
a. On the first occasion the F16 arrived +- 1 hour after the visual detection. Nothing was observed.
b. On the second occasion, pilots could identify a laser-beam projector on the ground. After investigation it appeared however that the description of the observations totally differed from previously described phenomena.
3. Consequently the Belgian Airforce, anxious to identify the origin of the phenomena, authorised F16 scrambles if following conditions were met:
a. Visual observations on the ground confirmed by the local police.
b. Detection on radar.

Events:
4. On 30 Mar 1990 at 23.00 Hr the Master Controller (MC) of the Air Defense radar station of Glons received a phone call from a person who declared to observe three independent blinking lights in the sky, changing colours, with a much higher intensity than the lights of the stars and forming a triangle. Meteo conditions were clear sky, no clouds, light wind and a minor temperature inversion at 3000 Ft.
5. The MC in turn notified the police of WAVRE which confirmed the sighting at +- 23 30 Hr. Meanwhile the MC had identified a radar contact at about 8 NM North of the ground observation. The contact moved slowely to the West at a speed of =- 25kts and an altitude of 10.000 Ft.
6. The ground observers reported 3 additional light spots which moved gradually, with irregular speeds, towards the first set of lights and forming a second triangle.
7. At 23.50 a second radar station, situated at +- 100 NM from the first, confirmed an identical contact at the same place of the radar contact of Glons.
8. At 00.05 2 F16 were scrambled from BEAUVECHAIN airbase and guided towards the radar contacts. A total of 9 interception attempts have been made. At 6 occasions the pilots could establish a lock-on with their air interception radar. Lock-on distances varied between 5 and 8 NM. On all occasions targets varied speed and altitude very quickly and break-locks occurred after 10 to 60 seconds. Speeds varied between 150 and 1010 kts. At 3 occasions both F16 registered simultaneous lock-ons with the same parameters. The 2 F16 were flying +- 2 NM apart. No visual contact could be established by either of the F16 pilots.
9. The F16 flew 3 times through the observation field of the ground observers. At the third passage the ground observers notified a change in the behavior of the light spots. The most luminous started to blink very intensively while the other disappeared. Consequently, the most luminous spot started to dim gradually.
10. Meanwhile the head of the police of WAVRE had alerted 4 other police stations in the area. All four, separated +- 10 NM from each other, confirmed the visual observations.
11. The aircraft landed at 01.10 Hrs. The last visual observation was recorded at +- 01.30 Hrs.

Conclusions:
12. The Belgian Air Force was unable to identify neither the nature nor the origin of the phenomena. However, it had sufficient elements to exclude following assumptions:
a. Balloons. Impossible due to the highly variable speeds (confirmed visually and by radar).
b. ULM. Same as for balloons.
c. RPV. Impossible due to the hovering characteristics.
d. Aircraft (including Stealth). Same as for RPV. No noise.
e. Laser projections or Mirages. Unlikely due to lack of projection surface (no clouds). Light spots have been observed from different locations. Light spots moved over distance of more than 15 NM. Form of inlighted part of spots has been observed with spectacles. Laser projections or mirages can not be detected by radar. 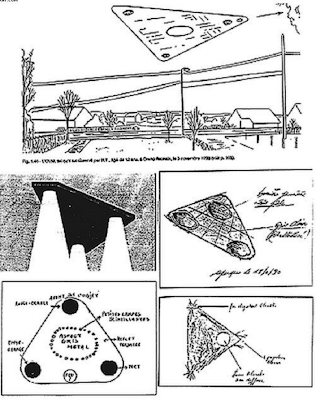 Eyewitness drawings and reconstructions of triangular craft seen in Belgium between 1989 and 1993. Courtesy of SOBEPS (click on the picture to enlarge)

The Belgian Air Force discusses sightings there in 1990 and the use of F-16 jets to locate them along with radar. Recorded in 1993. Interview with General Wilfried de Brouwer.

Short documentary on the significant ufo sightings in Belgium in 1989/90 backed with the refreshing openness of the Belgium airforce and excellent witness testimony and of course very good radar evidence that proves something very unusual took place involving highly advanced technology.The G forces were later calculated at 30G for the mystery craft,this would obviously kill a human pilot.

In the late 1980s, the UFO phenomenon found its way to Belgium, where hundreds of people reported seeing a strange formation of lights in the sky. A very interesting picture emerged from the sightings.
links:
Famous UFO cases: TR-3B