Hessdalen Lights are unexplained lights (a type of Will-o’-the-wisp ) usually seen in the valley of Hessdalen, Norway. These lights are well known and have been recorded and studied by physicists. One explanation attributes the phenomenon to an incompletely understood combustion process in the air involving clouds of dust from the valley floor containing scandium. Some sightings, though, have been identified as misperceptions of astronomical bodies, aircraft, car headlights, and mirages.
Hessdalen is a small valley in the central part of Norway. At the end of 1981 through 1984, residents of the Valley became concerned and alarmed about strange, unexplained lights that appeared at many locations throughout the Valley. Hundreds of lights were observed. At the peak of activity there were about 20 reports a week.
Project Hessdalen was established in the summer of 1983. A field investigation was carried out between 21.January and 26.February 1984. Fifty-three light observations were made during the field investigation. You may read the details in the technical report. There was an additional field investigation in the winter of 1985. However, no phenomena were seen during the period when the instruments were present.
Lights are still being observed in the Hessdalen Valley, but their frequency has decreased to about 20 observations a year. An automatic measurement station was put up in Hessdalen in August 1998.
Link: www.hessdalen.org 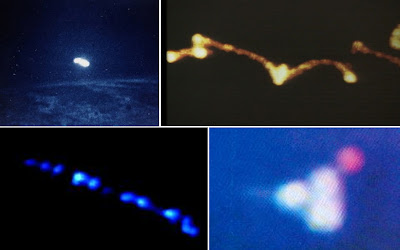 Click on the picture to enlarge.
National geographic, aired 1st March 2010
For centuries, people around the world have witnessed a strange phenomenon – orbs of light hovering in the night sky. Some say the lights chased after them as they drove away in their cars, and military pilots have reported spotting the lights on secret missions. Many wonder if the lights could be ghosts, or visitors from outer space. Now, (National geographic) joins the investigation and meets a team of researchers with a new theory on the origin of these strange lights.

Documentary about the UFO hotspot in Hessdalen, Norway (2009)