Latest UFO sightings – We already posted this Monday footage of UFO sighting which happend on 20 March 2010  over foothills of Sacramento, CA (link) but today our video was also shown on abc News10. 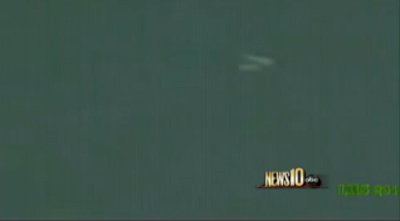 SACRAMENTO, CA- Are UFO’s taking a closer look at Sacramento? Local groups that track possible UFO sightings said there have been several interesting local sightings lately.
According to Ben Stoecker, the contact person for the Sacramento chapter of the Mutual UFO Network, there’s definitely something going on.
“There’s a phenomenon, or perhaps several phenomena, that we don’t even begin to understand,” Stoecker said. “Maybe they are Pleidians, or whatever, from another planet, or from Mars, even.”
Stoecker looked at a video of a possible unidentified flying object sighting in the foothills and said there are many possible explanations for some of the more unusual sightings.
“Maybe they’re objects built right here by some group on Earth or by our own govenment,” he suggests.
Sacramento City College astronomer, Liam McDaid, said he finds it difficult to understand why so many sightings are assumed to be from aliens from elsewhere in space.
“It’s probably not an alien species that’s traveled x-number of light years to come here and harass us, without doing anything obvious, or overt, like landing on the White House lawn, having a beer with Obama,” McDaid said.
Per Stoecker, the idea of UFO’s is not that difficult to imagine. He believes there may be advanced technologies, beyond human imagination, on Earth.
“We might be dealing with paranormal phenomena – a challenge to our very notion of reality,” Stoecker said. “Or with some bizarre life form. We don’t know.”
Astronomer McDaid would like to see some hard proof.
“I need to see some actual alien hardware, technology, metal, (an) ash tray with Alpha Centauri Hilton on it, something that will make it clear to me that it does not come from our planet,” said McDaid.
source: www.news10.net
Your opinion?