March 24, 2011- There was a UFO siting at the Oslo Airport, Gardermoen, which is the main airport serving Oslo, Norway. This mysterious UFO caused the second-busiest airport in the Nordic countries to close down on Friday. A plane carrying 400 passengers had to turn back around and land at the airport because of the unidentified flying object blocking it’s path. Thousands of passengers were detained when the airport closed for 90 minutes. This caused the Oslo Airport a loss of millions of dollars because so many flights and passengers were effected. 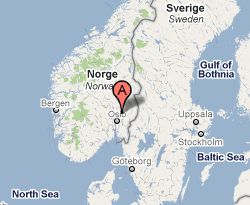 What was the mysterious aircraft? No one seems to be able to answer that question, as of yet. The only ones to see the object were crew members of a SAS Boeing 737 that were flying into Oslo Garermoen Airport from Frankfurt, Germany on Thursday, slightly before 4 p.m. The plane was less than 60km away from landing in Norway, when the crew members saw a greenish object hovering in the sky blocking their landing. The pilot of the plane gave the description of it looking somewhat like a hang-glider and later on commented that it looked like that of a sail plane. Whatever it was, it was not suppose to be there in their airspace. The SAS pilot radioed gound control to find out if there were reports of an aircraft in the area and there were none. It hovered in the skies for more than an hour and there was no way for incoming flights to land. It was directly floating at the same elevation that the airlines flying into Oslo Airport would maintain. All of the flights had to be re-routed or cancelled until the UFO cleared the area.

The only way the Boeing 737 could land at the Oslo Airport was to come up with a new flight plan. The crew members then flew the plane north-west of Oslo and made a southern turn back to land at Oslo. At this point, the pilot can see the greenish object under the plane and slightly to the right. It stayed with them for approximetely 20 seconds and then makes a controlled right turn and disappears out of the pilot’s view.
Oslo Airport, Gardermoen is the sixth-busiest domestic airport in all of Europe. More than 19 million people pass through Oslo Airport in 2010. Maybe they won’t have any more strange visitors in the friendly skies. Civil aviation will continue to investigate the incident.
www.Latest-UFO-Sightings.net (c) 2011
Your opinion?

New footage of bright stationary UFO over Bergen, Norway 8-May-2011