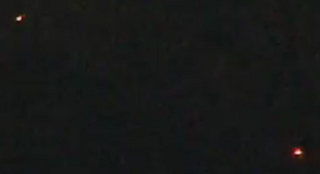 Latest UFO sightings – This video of two UFOs or orbs hovering in the night sky over Pennsylvania was recorded on 21st April 2011.
Witness report: These ones didn’t morph They pick different spots that seem to be picked after a higher-flying craft scopes out the area from above for safety. This is why camping out in the woods DOES NOT WORK. They have to already be IN there for anyone to get closer, BUT since on several occasions we’ve witnessed the fast-moving meteor-like orbs whiz off into other patches of woods, it’s likely that unless they ALLOW you to get closer, it’s not going to happen.
BEGINNING OF VIDEO was filmed days later IN those woods they hang out in. Shot was not on top of hill. I will post the entire hike (minus the tick sucking on my stomach) hopefully soon. Like the other patches they’ve been seen coming out of — no evidence was found (although I don’t have a Geiger counter to check for radiation).
I HIGHLY recommend some quality night vision equipment to see them when invisible to human eyes (they don’t ‘disappear’ btw, just somehow shift into infrared spectrum our eyes can’t see well).
Yukon Night Ranger Binoculars (has VIDEO OUT jack to record) or BETTER night vision equipment. Good advice on additional UFO hunting/recording equipment can be found in forums on UFONV.com (run by UFONV on youtube — guy who inspired me to get some).
Author (seeingUFOsPA @ youtube)
Your opinion?