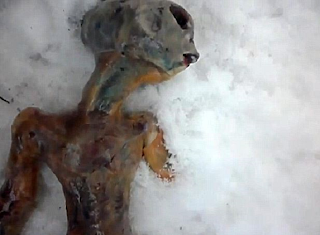 April 20, 2011 – Irkutsk, Russia has claimed more than a few sightings of UFOs and brushes with the extraterrestrial, in fact there are many claims made each year, so it may not seem so unusual that there is yet another encounter claimed now. The remarkable aspects of this particular encounter are that the unusual alien creature was dead and that it was filmed. There has been no confirmation yet as to whether the corpse like object in the snow is, in fact, alien, puppet, or something else.
The alien body was found by two Russian men in a depression in the snow, by what appears to be uprooted tree roots. It has a humanoid shape, it has arms and legs as well as a skull shaped similarly to that of a humans though the dome of the skull appears to be longer. The skull has deep holes for both eyes and a mouth, though no immediately apparent indication of a nose. The “corpse” is missing part of its left leg and partially buried in the snow. It is approximately two feet in hight and fairly thin.
Those who believe this creature to be extra terrestrial believe that there may be some correlation between its death and a claimed UFO crash in the same area approximately a month earlier. Theories include the possibility that it died in the supposed crash, and was left behind, or that a special division of the Russian military devoted to addressing extraterrestrial related problems missed it while cleaning up the supposed UFO crash.
Those who do not believe this creature to be extra terrestrial believe it to be some sort of puppet or home made figure. They believe that it is a hoax set up, possibly to gain attention in an area that is already considered a ” UFO hotspot”.
There has not, as of yet, been any new information reported as to whether an autopsy has been taken or if anyone has moved the body at all. While it certainly is very strange looking, we will have to wait for further investigation takes place to draw any real conclusions as to the true nature of the humanoid body.
www.Latest-UFO-Sightings.net (c) 2011 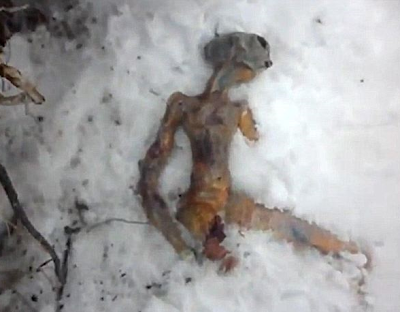 UFO Alien Body Discovered In Buryatia Russia April 2011
______________________________________________________________
April 22, 2011 Update!
Rt.com (Russia Today) has reported that the “dead alien ” found in Siberian Russia was nothing more than a hoax. The supposed alien corpse was two feet high and badly mutilated, found partially buried in the snow by two Russian men. Because the body was so humanoid in appearance, a news paper editor to whom the story had been submitted called the police, fearing that it was the body of an infant or a young child, instead of the body of an extra-terrestrial.
Upon being confronted by the police, who took the report seriously and began investigating, the men who “found” the dead alien admitted to it being fake. They said it was chicken skin that had been stuffed with bread and painted ” alien colours”. The men were not charged with any sort of crime, as creating a hoax is not a crime, however they were apparently reprimanded for their actions, which caused a police investigation. Furthermore, the crash landing that some believed the alien body to have come from, are now said to be bombing testing that had been taking place at a near by Military testing range.
While there is proof positive that this particular incident is not, indeed, a real alien , one should not consider it proof negative of extra-terrestrial life.
Your opinion?

Mysterious lights filmed over Russia by many witnesses 23-Dec-2011

UFO with giant Aliens landing in Voronezh, Russia in 1989